The first known association between GBS and the flu shot became apparent during a mass vaccination program in the United States with a swine influenza vaccine in 1976-1977. It should be noted that in 1976, an influenza outbreak occurred in Fort Dix NJ. The outbreak was traced to swine-type influenza A (H1N1). In reaction to the outbreak and the danger from an epidemic from swine influenza, the United States Department of Health and Human Services instituted a mass vaccination of the US population. Approximately fifty (50) million adults were vaccinated during the short three (3) month interval from October – December 1976. Of the mass numbers vaccinated, there were over five hundred (500) cases of Guillain Barre Syndrome including thirty (30) deaths. A study of the incidence of GBS discovered that there was an elevated risk of Guillain Barre Syndrome within six to eight (6-8) weeks of vaccination. Following the elevated GBS risk, the government ordered the cessation of the swine flu vaccination program in early 1977. A GBS flu shot injury attorney will refer to the swine flu incident as the strongest evidence of a causation link. 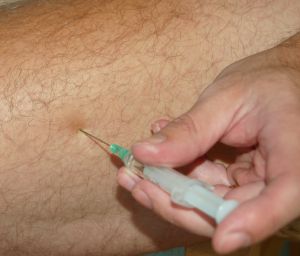 Other studies have confirmed a causal relationship between the 1976 swine influenza vaccine and GBS onset in the adult population. According to the Vaccine Adverse Events Reporting System (VAERS), there was an increase in GBS reports in 1992-1993 and 1993-1994 associated with the influenza vaccine, with data suggesting an increased risk within six (6) weeks following influenza vaccination. VAERS is a system employed by the United States for rapid reporting of adverse events following vaccination. The US Federal Court of Claims often inquires as to whether a VAERS report was filed following an adverse reaction to a vaccination.

An evaluation of trends of reports to VAERS of Guillain Barre Syndrome following the flu shot in adults reflected that there was a possible causal association between GBS and influenza vaccine. There was an average of onset of GBS about two (2) weeks after the vaccination and few cases of preexisting illnesses that could possibly explain the onset. A Guillain Barre vaccination injury lawyer will emphasize the timing of the onset of peak symptoms.

Between 1990 through 2005, there were over one thousand (1000) cases of GBS reported after vaccination. In the majority of cases, symptoms appeared within six (6) weeks of vaccination. GBS cases were most prevalent following the influenza vaccine followed by the Hepatitis B vaccine. For adults, there was a greater incidence of Guillain Barre under 65. The peak GBS symptoms appeared within two (2) weeks post vaccination. There appears to be a bell curve with greatest number of incidents reaching a peak at two (2) weeks with declining numbers approaching the six (6) week mark post vaccination. Over eight hundred (800) cases of GBS were reported in the US between 1990 through 2009 following the flu shot of which about half were men.

The vaccine compensation court deals with vaccine claims of which the majority have been GBS cases following the flu shot. For the most part, provided no preexisting upper reparatory or gastrointestinal illness, many individuals who were otherwise healthy before the flu shot will expect to receive some compensation for their GBS. A neurologist will generally provide an expert report on the link between influenza and the flu shot. The special master in charge, who generally makes decisions as to causation and damages, will look at the expert report . The expert report will lay out a medical theory of causation between GBS and the flu vaccine. Molecular mimicry is often cited as a plausible medical theory. Next, the expert must explain why in the particular case, the medical theory is applicable. Finally, the expert comments on the timing of onset of GBS symptoms and how the specific case is applicable. It is helpful to show that the patient reached a peak of symptoms at the 2 weeks mark post vaccination in accordance with the VAERS data.

If you have incurred GBS following influenza or hepatitis vaccination, immediately contact a GBS injury attorney
, who can handle cases nationwide and is qualified to files cases in the Court of Claims.