In our last blog entry , we completed analysis of the criminal defense of the Horizontal Gaze Nystagmus (HGN) test.

The next major test a New Braunfels DWI lawyer must overcome is the Walk and Turn (WAT), where the driver is instructed to walk heel-to-toe while counting in a loud voice with each step. In this test, the driver will walk nine (9) steps , turn around, and walk back nine (9) steps. All steps are heel-to-toe. In this test, the arresting officer wants to highlight the inability of the driver to maintain his balance and / or a failure to properly follow instructions.

According to the National Highway Traffic Safety Administration (NHTSA) Manual, there are eight (8) potential clues. If the driver fails on at least 2 of the clues, then the theory goes that the Blood Alcohol Level (BAC) is over the legal limit of .10. During the test, the driver may make mistakes such as stepping off the line. The Manual states the person has failed the test if he steps off the line more than 3x. Any evidence that the driver is about to fall and injure himself is also enough to demonstrate a failure on the WAT. 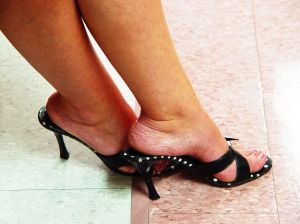 According to the NHTSA, the accuracy of the Walk and Turn approaches 70%, which is not exactly a strong indicator of reliability. The theory goes that a failure of all three tests (HGN, WAT, and One-Leg Stand) demonstrates enough reliability to show intoxication over the legal limit.

A San Antonio DWI attorney must carefully review the videotape of the Walk and Turn to aggressively defend against this test. The first point of attack is the starting position. In the WAT, the driver is supposed to place his right foot forward, placing the heel of his right foot against the toe of the other foot. He may not use his arms to balance and the arms must be at his sides. Simultaneously, the arresting officer will position himself to the side of the driver and begin instructing him on conducting the WAT. The driver will inevitably turn his head or body to listen to the officer while he stands in this position. Sober drivers would have a hard time maintaining this position without using their arms to keep from stumbling. Thus, from the outset, the WAT is designed to make a person look foolish.

During trial, the prosecution may ask the officer to come down from the stand to demonstrate a field sobriety test. Rarely does an officer assume the starting position demanded during the WAT. A strong DWI defense tactic is to question the officer on a normal standing position – feet shoulder width apart and arms dangling. More often than not, that is exactly how the officer will initially stand when he explains the tests.

In our next blog entry, we will focus on additional ways a Comal County DWI lawyer can attack the Walk and Turn Field Sobriety Test.