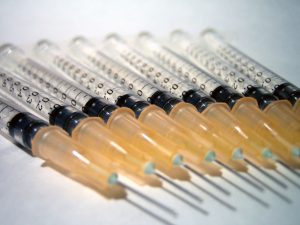 The Miller Fisher variant of GBS is also linked to the flu vaccine. In Miller Fischer, the victim develops ataxia (defined as the presence of abnormal, uncoordinated movements), ascending numbness, and facial palsy shortly after the influenza vaccination. The key distinguishing difference between GBS and the Miller Fischer variant is that while GBS victims experience descending numbness from their upper extremities, Miller Fischer victims experience ascending numbness originating from their lower extremities (legs , toes). Both GBS and the Miller Fischer variant can all develop after an antecedent infection and share a characteristic elevation of cerebrospinal fluid (CSF) protein.  An elevation in CSF proteins is often a tell tale marker of GBS, and lumbar punctures are the primary mechanism to identify the elevation. GBS victims often develop a disabling chronic fatigue syndrome, often manifesting itself as chronic inflammatory demyelinating polyneuropathy (CIDP). Their conditions are often compatible with the spectrum of acute inflammatory polyneuropathies with vaccination as the triggering  factor.