After our prior discussion on pedestrian car accident injuries, we turn now to some of the more common types of collisions. More often than not, some types of accidents like rear end collisions invoke the doctrine of ‘res ipsa loquitur’, a fancy way of saying that we can infer the defendant was negligent and go right to the jury without having to put on specific evidence. It is a great situation for plaintiffs and can make settlement and/or a trial proceed much more smoothly.

To illustrate res ipsa loquitur, there are some common types of accidents that come to mind. In cases where the vehicle leaves the roadway without apparent cause, there is an inference of negligence. Another example is a recent trucking case where Baseluos Law Firm was able to show that a tractor trailer veered into the shoulder where another tractor trailer was legally stationed causing great injuries and property damage. In accidents where injury resulted from a wheel or auto part coming of a vehicle, courts have inferred negligence.

In San Antonio and greater Bexar County, we often see injuries occur where a car comes to a stop on a highway without a collision or where the motor vehicle turns over on a highway without a preceding event. Oftentimes, we see objects such as cargo, equipment, or furniture fall from a vehicle causing injury. If you can believe it, there have even been cases of parked cars accidentally starting and causing collisions. Many of these cases fall under res ipsa loquitur.

There are some cases where negligence is not automatically presumed. Courts have frequently rejected the presumption in cases where an injured party tried to hold the owner liable from a tire blowout accident.

Another major topic is under what circumstances we can hold an owner liable for the negligent operation of a motor vehicle that is driven by someone else. In general, an owner who gives his express or implied permission to another person is ultimately also responsible if that person negligently hurts another person. Baseluos Law Firm sees this scenario often. The operator of the vehicle will carry some minimal amount of liability insurance while the owner of the vehicle possesses a much larger liability policy with umbrella limits that can greatly help the seriously injured. A Texas car accident attorney will do preliminary investigation into the liability limits of both the owner and operator to effectively gauge proper monetary compensation for their client. Investigative efforts should also be made to identify ALL owners of a vehicle since the vehicle at issue may have multiple owners with insurance coverage.

Another key concept involving the owner versus operator relationship is the concept of agency. An owner is liable for the negligent operation of a vehicle by an agent or employee which occurs in the course of agency or employment. For example, a vehicle driven by the employee of a dealership gets into an auto accident while using the vehicle to transport some passengers. The dealership business in addition to the actual driver is responsible. Often times, these businesses carry commercial vehicle injury coverage. There are exceptions. For example, taxis are often operated by independent contractors and their owners are less likely to be liable. On the positive note, taxi or livery drivers carry insurance with the higher commercial limits.

The concept of agency stretches to family cars in which owners can be held responsible for the careless driving of a family member, an extremely common scenario in San Antonio. 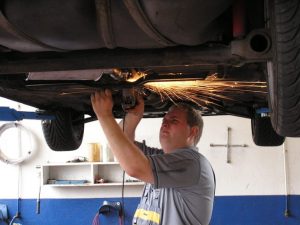 In most cases, the law says no. The mechanic is considered an independent contractor, free from any control of the owner. In some cases, however, the owner may still be held liable if the owner is deemed to have consented to the mechanic’s operation or in some cases if the owner knew or should have known the mechanic was an unsafe driver.

These types of scenarios are quite uncommon. The most common scenario is where an employee negligently commits an accident with a car owned by his employer. The only remaining question is whether the employee was within the scope of his employment when he operated the vehicle. Baseluos Law Firm is well versed in these types of cases and often can get high rewards for client due to the likelihood of a commercial auto policy.