Imagine you are walking down a public street and a police officer approaches you and expresses a desire to ‘ask a few questions.’ This is a scenario that plays itself out throughout the country. Police officers stop people on the street and conduct face to face questioning. They question people during car stops for traffic offenses. They may conduct questioning while making visits to a home or office. Sometimes, they may ask individuals to come down to the station or they may contact people over the phone. The first pressing question is whether a policeman can stop you on the street and question you even if there is no reason to suspect any wrongdoing.

The answer is ‘Yes’. Even without a reasonable suspicion, law enforcement can approach people for questioning and even ask to search objects in your possession. However, a line is drawn if the officer suggests you MUST talk to them or allow them to search your person or possessions. This is impermissible under the Supreme Court’s ruling in US v. Dayton. The rule of thumb is that a person is not generally required to answer inquiries from law enforcement or submit to a search. 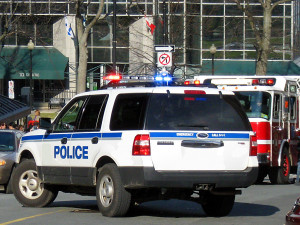 There are exceptions where law enforcement will ask for identification. Most states have “stop and identify” which allows law enforcement to detain individuals and request identification provided there is a reasonable suspicion of criminal acitivity. Under Texas penal code, Section 38.02 , a person commits an offense if he refuses to give identifying information to a police officer who has lawfully arrested him. The general rule of thumb if you are unsure is to provide only your name, date of birth, and residence when asked. However, beyond this information, you have a Fifth Amendment right to remain silent. You cannot be punished for refusing to answer questions beyond identifying questions. Recent Supreme Court decisions have stated that you must verbally assert your right to remain silent with a simple “I invoke my right to remain silent.”

Some people ask whether they have the right to walk away from a law enforcement officer who questions them. If law enforcement does not have ‘probable cause’ ( defined as the ability to articulate an objective factual basis to suspect a person has committed a crime) to justify an arrest or a ‘reasonable suspicion’ to do a ‘stop and frisk’ (detaining and questioning someone with a limited pat-down search for weapons), then yes, a person can walk away from a police officer . Yet it is impossible to know exactly why the police officer is questioning you. Sometimes, law enforcement can have probable cause or reasonable suspicion to do a stop and frisk even if the individual has not done anything wrong. An officer can forcibly detain a person who begins to walk away from police questioning. A practical way to avoid unnecessary confrontation is to simply ask the officer if you are allowed to leave. If the officer refuses to allow you to leave, then obey his commands. However, do not feel compelled to answer any questions. Ultimately, your attorney will challenge whether the officer had legal justification for the detention.

Even if you do engage in an interview with police, you can stop your conversation with the police at any time. Some police officers will threaten an individual with loitering if the person refuses to answer questions. Loitering is defined as aimless wandering such that a person would threaten public safety. A police officer could request id and engage the person in questioning if he has sufficient reason to believe a person is loitering.  In some jurisdictions, there are complaints that loitering laws are being used to discriminate against indigent people and ethnic minorities. It is best not to get into confrontations with police over loitering laws.

If you are accused of a crime that involves a confrontation with the police, contact a San Antonio Criminal Defense Attorney without delay.