In San Antonio , Texas, and throughout the United States, an interesting problem is occurring – you have your seat belt on as an occupant in a car accident and the official police report says you did not have the seat belt on. You are angry and upset, because you know that you did in fact have your seat belt on. The Texas Department of Public Safety like many states offer specific occupant restraint laws . 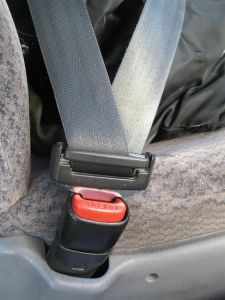 Unfortunately, the crash impact can actually cause the seat belt to detach without any evidence of damage. After the accident, the seat belt functions without a problem, and there are no stress signs on the webbing of the belt, plate where the belt latches, and the metal D-ring.

Do not fret – even if a traffic investigation report reflects that the seat belt was not worn, you may in fact have a good seatbelt defect case .

The unlatching of the seat belt is known as ‘inertia unlatch’. Seatbelts can be designed in such a way that inertia unlatch does not occur – yet, ironically auto manufacturers will not implement these latch designs. During a crash, an occupant can be subject to severe abdominal injuries when their body moves under the lap belt. In addition, some seatbelts do not lock during crashes because of defects in the seat belt retractors.